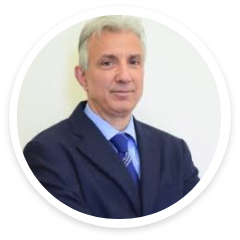 Prof. Andreas Anayiotos is also the Director of the Biomechanics and Living Systems Analysis laboratory (BioLISYS) at the Cyprus University of Technology which is involved in Cardiovascular and Cancer Research. http://biolisys.cut.ac.cy/

He has been the director of the Biofluids Laboratory at the University of Alabama at Birmingham Department of Biomedical Engineering and is an Associate Editor in the Annals of Biomedical Engineering and a reviewer in numerous other international journals. He has been an expert evaluator in Bioengineering for the European Union, the National Institutes of Health (USA) and the National Science Foundation (USA).

He has published more than 200 peer reviewed publications and conference proceedings publications and has developed numerous courses in Biomedical and Mechanical Engineering. He has been an organizer and chairman of numerous technical sessions and panel discussions with industrial participation for the Biomedical Engineering Society, The World Congress of Biomechanics and the Summer Bioengineering Conference.

He is involved in technology transfer and innovation activities at the Cyprus University of Technology and the Eratosthenes Centre of Excellence.