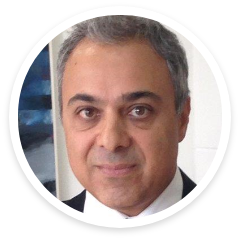 Leonidas Phylactou is the Chief Executive Medical Director of the Cyprus Institute of Neurology and Genetics (CING) and the Provost of the Cyprus School of Molecular Medicine, the postgraduate school of the CING.

He studied Medical Biochemistry at the University of Birmingham in the UK and then did a PhD in Molecular Genetics and Gene Therapy in the same University, although most of the time was spent at the University of Connecticut Health Centre in the USA. He then moved back to the UK, to the University of Oxford as a post-doctoral scientist, where he set up a team working on gene therapy for Myotonic Dystrophy.

In 1998 he established a research group at the Cyprus Institute of Neurology and Genetics working on the gene function and gene therapy. In 2005 he was appointed Head of the Department of Molecular Genetics, Function and Therapy in which, apart from the research activities, he is responsible for diagnostic services in Medical Genetics. His research interests focus on the gene therapy for muscular dystrophy, the identification of biomarkers in Myotonic Dystrophy and the investigation of molecular causes for inherited diseases.

Leonidas Phylactou sits on the Editorial Boards of the journals Molecules, Pharmaceuticals and Aptamers and has secured international funding from several organisations such as the Association Francaise contres Les Myopathies, the Human Frontiers Sciences Program and the Muscular Dystrophy Campaign, UK. He participates in several European Networks and has published extensively in the areas of his expertise.