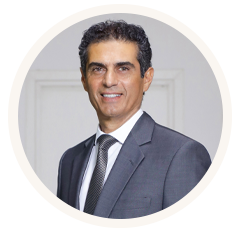 Professor Philippos Patsalis is a world-class geneticist, researcher and successful business entrepreneur, who has been leading public and private sector organizations since 1993. Prof. Patsalis held numerous executive positions and he served on several international scientific and business Boards, Committees and Councils during his 25-year distinguished career. Most notably, he held the presidential-appointed position of Minister of Health of the Republic of Cyprus. He is currently the CEO and CMO of NIPD Genetics Public Company, a biotechnology company he founded and has been successfully leading since its inception in 2010. Prof. Patsalis was for 10 years the founder and director of both The Department of Cytogenetics and Genomics and Translational Genetics and for 8 years the Chief Executive Medical Director of The Cyprus Institute of Neurology and Genetics, the largest and most technologically advanced research institute of Cyprus. Prof. Patsalis was also the founder of the Akeso Fertility Center and The Cyprus School of Molecular Medicine, an academic school for graduate education, for which he served as its first Professor and Provost. Prof. Patsalis is an accomplished executive director, researcher and entrepreneur who has been bestowed with more than 30 multitude of national and international awards and distinctions for his contribution to science, innovation and business.