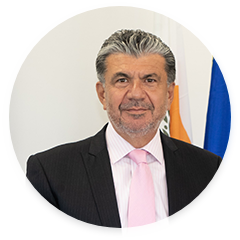 He is a holder of Bachelor of Engineering, Master of Science and PhD in Electrical Engineering from the State University of New York in Stony Brook. From 1989 until 1997, he was an Associate Professor at the Department of Electrical Engineering at the New York Institute of Technology, USA, having also served as a Professor of Engineering and Informatics of Intercollege, Cyprus. From 1994 until 1997, he was collaborating with the Multimedia Communications Research Group of Bellcore’s Applied Research Division in Morristown, New Jersey, USA.

Dr. Himonas has published numerous research papers in scientific journals and conference proceedings in the fields of detection and multimedia communications. He is listed in the Who is Who in the World, Who is Who in American Education and Who is Who Among Human Services Professionals.