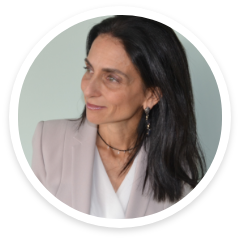 Marina Hatsopoulos was Founding CEO and original investor in Z Corporation, an early market leader in 3D printing which was sold in 2005. She is Chairperson of the Board of Levitronix Technologies, the leader in magnetically-levitated bearingless motor technology. She is on the Advisory Board of the Nantucket [technology] Conference, and MIT Enterprise Forum Greece, as well as Eurobank’s EGG incubator and the OK!Thess accelerator in Greece. She is an investor in codebender and RTsafe, both based in Greece, and C2Sense, based in Cambridge, MA. She was a Director and investor in Cynosure Inc., a $400 million leader in the laser aesthetics market, which was sold for $1.65 billion.

She was also a Director of the GSI Group, a $300 million supplier of laser-based equipment, and Contex Holding, a $100 million leading manufacturer of large-format scanners. She was an investor and Director of Dear Kate and Tea Forte.

She holds B.A. degrees from Brown University in Math and in Music, and an M.S. from the Massachusetts Institute of Technology in Mechanical Engineering.